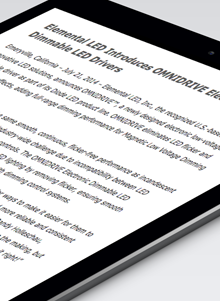 Reno, NV – Elemental LED, a leading U.S. based engineering and technology company that manufactures LED lighting, announces their win of Technology Company of the Year from Nevada’s Center for Entrepreneurship and Technology (NCET).

On Wednesday, NCET hosted the 2020 Tech Showcase and Awards Gala from the Reno-Sparks Convention Center, attended by the area’s leading influencers. Elemental LED was presented the award by NCET President and CEO, Dave Archer.

“We are a company that prides itself on leading advances in innovation and technology, which makes this recognition is a special honor,” said Randy Holleschau, President & CEO of Elemental LED. “We are proud to be a part of this prosperous community of groundbreaking businesses.”

About NCET:
Nevada’s Center for Entrepreneurship and Technology’s roots go back to 1999, when community and business leaders, along with EDAWN, the Economic Development Authority of Western Nevada, created the TechAlliance, an organization that promoted entrepreneurship and technology commercialization throughout Northern Nevada. Today, NCET is Northern Nevada’s largest educational and networking organization, producing a wide range of programs and events to help people explore intersecting opportunities for business and technology.