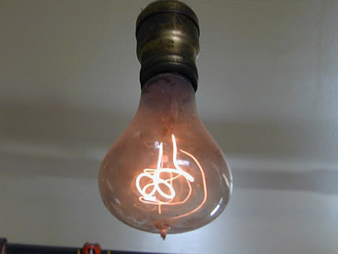 Your LEDs will get somewhat closer to lasting forever, and put out more light while at it.

The oldest working light bulb in the world sits in a fire station in Livemore, southeast of San Francisco. It is called the Centennial Bulb, perhaps because it’s been running for over a century. It’s an incandescent, carbon-filament bulb intended as a nightlight, only about 4 watts. It is well documented to have been running almost continuously since 1901—for 111 years. The fire department will let you take a look at the Centennial Bulb. I have a friend in Livermore and I’ve been meaning to visit him so as to have an excuse to visit the bulb. One of these centuries, it may actually burn out.

There’s a reason why the Centennial Bulb is still running after over a century, it’s not an accident. The bulb was made by the Shelby Lighting Company, one of the various small players that sprang up on the fringes of Edison’s breakthrough. Shelby did not have the engineering resources of the larger companies, had sloppy process control and their bulbs had a large output variation. But, the bulbs with the lowest output ran at relatively low temperatures. And now these low-output/low-temperature running bulbs comprise the half-dozen longest running light bulbs in the world.

A basic principle of the universe, is that heat morphs things. It stirs up the molecules. And if you want things to last longer, keep them cool. This is as true of your new LED lighting system as of the century-old carbon filament incandescent. LEDs have about the longest lifetime of any light yet invented, many, many tens of thousands of hours. But they degrade faster if overheated, as do the power supplies and dimmer electronics that support them, and the light output will start to drift downwards from heat well before outright failure.

Open-mounted lights such as wall washers (basically floodlamps designed to be pointed at a wall) present few heat issues.  But be careful not to stuff puck lights or par cans into a pocket full of insulation. Don’t put LED lights over a range top or other source of rising heat. Examine the outside of your LED light, dimmer, or power supply. It may have slots or fins. Figure out how to vent these to somewhere. It is also a good idea to look for a hardcopy or online manual, and read it. Elemental LED product information and instructions sheets can be downloaded on every product detail page.

Once you have done all this, your LEDs will give you another reward: More light. You see, LEDs run more efficiently when they are cool. I recently crossed paths with a special-purpose 180W lamp that was cooled only by fins with no fan. That’s a lot of power for passive cooling. A customer started pointing external fans at the units and reported a 30% increase in light. That seems a bit extreme to be credible, but the customer was installing these lights at a Stanford University lab. In fact, LEDs really like being downright cold, which is why you see so much LED lighting in refrigerator lockers.

If you treat your LEDs well enough, might you beat the record of the Centennial Bulb?  Hard to say. No one is quite sure how old the oldest LED could end up being. And, of course, power supplies also fail.  But it could happen and it could happen to you. Stay healthy, eat lots of veggies, and hang around to find out.

Doug Widney is a San Francisco Bay Area-based Electronic Greentech Consultant. He specializes in high-power LED circuit design and has built arrays up to 1.5 kilowatts for various customers. He is a contributing writer for Greentech Media on LEDs, vehicles, and building efficiency. A 30-year Silicon Valley veteran of companies such as Nokia and Quantum, he holds several U.S. patents. He is LEED V2.2 certified by the U.S. Green Building Council.