A financial analyst who sometimes writes on LED companies decided to install LED lights in his bathroom.  They weren’t flattering—a bit bluish, like old fluorescents.  The salesman explained that these were  “cool” whites, that they had a "color temperature” of  5200K (Kelvin), and that he needed a “warmer” light—with a LOWER color temperature. To the analyst, the fact that a warmer light has a lower color temperature was counterintuitive.

So the analyst bought a very “warm light”, the lowest LED color temperature the shop carried, 2600K.  It wasn’t bluish anymore; superficially it looked mellower.  But people’s faces didn’t look quite right, and on close examination the light was slightly purple.  This is usually associated with a cooler light and higher color temperature.  But the salesman swore that the bulbs, a famous brand, met their rating. The new color didn't do anything to resolve the confusion about how color temperature is measured and expressed. The analyst felt he had stepped into an Alice-in-Wonderland world of light parametrics, where cooler is warmer, green with less green in it can look greener than green—and white isn’t always white.

The explanation behind this phenomenon involves both light itself and incandescent white.  As you may remember from science, light is a small fraction of the electromagnetic spectrum, ie. the same wave class as radio.  Waves have a wavelength, (for example the distance between surf rollers).  Traffic light green has a wavelength of 520 nanometers (nm), 520 billionths of a meter. The familiar rainbow of colors runs from 750 nm (deep or “far” red), to 390 nm (far violet).

Now let’s describe incandescent white:  When something gets hot enough, molecules get to bouncing around, and electrons start bouncing up and down from higher to lower orbits. This kicks out photons of light, with a statistical distribution throughout the visible spectrum.  So incandescent white is a sort of smear of all the wavelengths/frequencies/colors, rather like all the noise across the band of your radio.

Many products don’t state color temperature on the packaging, and you may need to rely on ratings such as “warm white” or “neutral white.”  Products on Elemental LED list color temperature in a chart on the tech specs tab. Generally "warm white” is 2600K to 3000K, neutral is 3000K to 5000K, and cool is over 5000K. 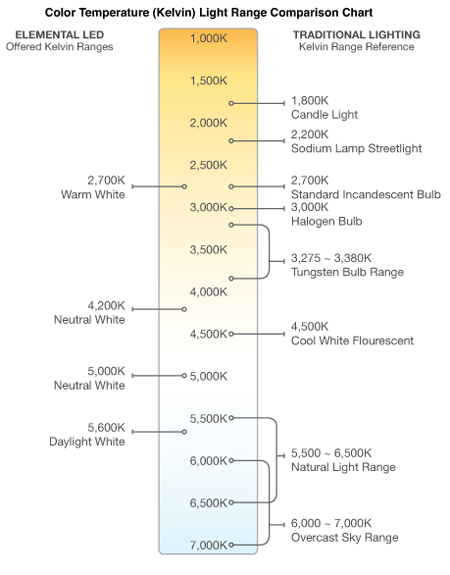